This beautiful lady is my grandmother, Margaret Joan Robinson.

Brought up in north-east London, Margaret was a woman way ahead of her time. Forward-thinking, dynamic, driven and extremely business savvy. Even though she was only 5ft tall, she didn’t take any crap off of anyone.

At 22, she was a sergeant in the WRAF (Women’s Royal Air Force) and after leaving the Air Force, she and my grandad ran many successful businesses in and around Devon. My grandmother was an unstoppable force of nature and was driven to succeed in everything she did.

When I was 6 years old, my grandmother bought an old pianola (player piano). I remember the first time we went over to their place to see it. The moment my little fingers touched the keys I was in heaven.

From that day on, I wanted to visit as often as possible so I could sit in front of the piano and noodle. I’d spend hours writing my own tunes (most of which I’m sure were bloody awful) or trying to figure out songs I’d heard on the radio. My grandmother taught me how to play an old traditional piece of music which I still remember to this day.

This is one of only a handful of memories I have of my grandmother. She passed away when I was 11 and the events surrounding her death changed our family forever.

Margaret lost her life in 1992 after having unnecessary surgery from a doctor who was at the centre of the Bristol Heart Scandal (James Wisheart). Wisheart performed heart surgery on my grandmother and blamed the issues on ‘faulty equipment’. 10 years later it came to light that it was in fact his incompetence that took her life as well as causing brain damage to over 100 children. There have been multiple news stories about the incident as well as a one-off BBC dramatization.

Before my grandfather passed away in 2011, he and I started creating a family tree together. We found lots of interesting information about his side of the family, but absolutely nothing whatsoever about my grandmother. She was an intensely private person and didn’t share any information about her family, her life in London, her upbringing. Nothing. And whenever I tried searching for information myself it was always a fruitless exercise.

My grandfather’s side of the tree has a plethora of information with well over 100 people in it, a couple of whom I have met in person. My grandmother’s side is quite the opposite.

It contains her, her brother and mother, and literally no one else.

And that is exactly how it has stayed all this time, up until a month ago, when someone out of the blue contacted me, saying we were related through my grandmother.

I couldn’t quite believe it and really hoped this guy wasn’t barking up the wrong tree. I asked for more info and sure enough, we are related. Not only that, but he knows a ton of info about my grandmother’s side of the family.

😮 THEY ARE ALL MUSICIANS 😮

All this time, I believed I was the first one to take up an instrument and play professionally. But it turns out my great-Uncle played piano for a theatre in London and my grandmother’s parents played on cruise ships as well as in the pub they ran in London. Everyone in the family was musical and apparently they all played by ear extremely well, something I have always been really good at.

I got to see photographs and look into the eyes of people I didn’t even know existed, as well as hear first-hand accounts of what these people were like and their love of music.

I even got to see photographs of the pub where my grandmother grew up: 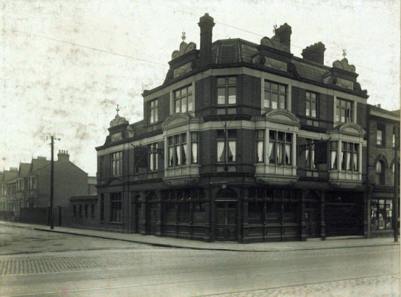 Once I had processed all of this incredible information, my memories of 6-year-old me playing piano in my grandparents’ house took on a whole new meaning. I had no idea that by simply being a musician, I was connecting to people in my family line who I knew absolutely nothing about. People who were just like me.

I have always felt like a lone wolf, doing my own thing that isn’t in any way connected to anyone else in my family. Now I can truly say that I come from a long line of musicians and I’m carrying on the family tradition ❤ ❤ ❤

I can’t believe that this time next week I will be one year older 😯 🎂 This year has absolutely flown by at warp speed 🚀
Tomorrow (Tuesday 13th) is HAAM Day 🙌 100% of the tips from my online show will go directly to @myhaam ❤️ Come hang! We go live Tues at 6pm CST, linkin bio 🤓⭐️👍🎶
RIP 🇬🇧😞💕🙏
I can’t believe it’s September ALREADY 😯 Wasn’t it like February last week?? 🤔

(Thank you Susan for sending this to me!)