If you read my previous blog, you’ll know that I had the most amazing experience exploring beautiful Eidfjord in Norway.

I honestly didn’t think it could get any better….and then there was Geiranger.

The cruise ship left Eidfjord and traveled all through the night to get to Geiranger.  The following

morning I woke up to find our vessel parked right slap-bang between a gaggle of HUGE snow capped fjords.

So…just to give you some idea of the view from my cabin window – you know those pictures they always use to advertise the ‘magical’ Norwegian fjords? They’re always on a perfectly still sunny day, with the clearest looking water you’ve ever seen in your life, capturing spectacular wildlife and waterfalls dotted here and there….

Well, it looked a bit like that. No, it looked EXACTLY like that….only way better.  It was like total eye candy for the soul….and it was REAL, totally real.  AND right outside my little window!

Once I saw what was out there I grabbed my camera and headed out to explore.

I didn’t have any kind of game plan. I just walked where ever felt right…which in that moment was a road off to the left that followed the water along a mild incline and up towards a steep hill.

Having lived in Austin, TX for the past 4.5 years my steep hill climbing skills are much weaker than they used to be when I lived in hilly Devon, England 😉 But luckily there were PLENTY of sights to ‘oooo’ and ‘ahhh’ at long before the rather scary looking incline.  I was stopping literally every 5 mins, convinced each time that I’d seen the best views to take photos of.

It was a truly magical experience that I’ll never forget ❤

Thank you so much Geiranger, you’re awesome – but I’m sure you already know it.

The next two locations on our journey were Alesund and Bregen.

I’m slightly ashamed to say I decided to have a ‘hang out on the cruise ship’ day in Alesund and I was prevented from seeing Bregen due to inclement weather.

It was raining, a lot.

Just a heads up for anyone who doesn’t already know – I’m originally from the UK…so my opinion of what a lot of rain is may well be very different from yours.

In Austin, TX if it rains people act like acid is falling from the sky and they’re going to die.  At the very least, they wont go anywhere.  Plans are changed, people refuse to go out.

If they adopted that approach in England, they literally wouldn’t go anywhere. Ever.  It rains more often than not.  And by ‘rains’ I don’t mean for like 10mins here and there – I mean HEAVY rain for sometimes weeks at a time.

So when the cruise ship said the rain was making it unsafe for people to venture out, I stuck my head out and thought…

But after standing there for a few moments watching the freezing cold sideways rain drench absolutely everything it came into contact with, the newly born Texan in me (who has gotten very used to almost 300 days of sunshine a year) thought….

‘ya know – getting wet and soggy isn’t actually that appealing, let’s go back inside and grab a drink or something’…

…to which of course the British part of me responded in total disgust with ‘Coward! You’re scared of a few drops of rain?! You can STILL have TONS of fun *even* in the pouring rain!!’.

Sorry Brit, it actually sucks being cold and wet….unless there’s a toasty fire, a cup of tea and a tray of chocolate digestives waiting for me….then it’s not so bad.

And due to the yucky weather we ended up leaving Bregen early as we were due to hit a nasty storm.  They announced to the whole ship that we’d be hitting 10ft high swells and if we had any anti-nausea medication now would be the perfect time to take it.

The captain said he thought the rough seas would only last a couple of hours.

A few hours turned into 8….and they were 8 very loooooong hours.

This is a short clip of how it all started – when it got really rough I couldn’t stay upright (in this video I struggled to hold the camera up we were rocking around so much!). 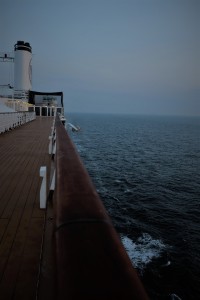 hour flight, finishing with a 45min car ride….I was back at home in lovely Austin. It felt like I’d been gone forever….it was only 14 days.

What a super cool experience that I’ll never forget.

Thank YOU as always for reading this far.  Can’t wait to see where life takes me next….

Oh! And I couldn’t finish this post without showing you an animal made out of towels.  Ari my amazing room cleaning dude made me a different animal every single day.

Yes, he was a legend and a genius. 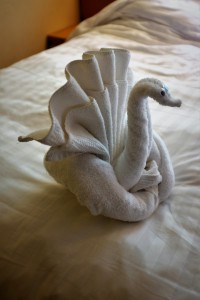 A few months back I was asked if I would like to play a couple of shows with Ruthie Foster on a cruise ship heading out of Rotterdam and then spending 5 days exploring the fjords of Norway.

Rather unsurprisingly, I said yes 😉

I’d never been on a cruise ship before, never mind played any music on one – so I really had no idea what to expect.  I heard multiple horror stories from various folks eager to share their experiences (which seemed to mostly involve getting motion sickness and then hurling somewhere or another).  This didn’t exactly fill me with confidence – but thankfully all was totally fine….

…..with the exception of the last night of the cruise – which I’ll tell you about later. 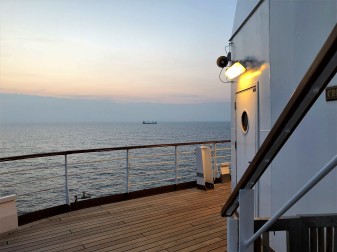 The cruise lasted a total of 7 days and a couple of those were spent being out in open water.  Not seeing any land did feel a little odd at first, but once I found the very top deck and could look out across miles and miles of absolutely nothing but beautiful blue sea it was wonderful.

My shows with Ruthie were on the second day of the cruise and were (of course) SO much fun.  I played mostly drums but also bass on a couple of tunes.

Here’s a few clips.  Sorry we appear to be in miniature (we are regular sized people I promise). I thought this would be a good spot for my GoPro camera to sit. You may need set of opera glasses….

After the shows were finished, all I had to think about was exploring Norway.

I woke up the morning after our show believing we were still moving across the ocean….but I drew my curtains and was greeted by 2 giant fjords and a small cluster of characterful houses of all shapes and sizes dotted around the hillside.

We had arrived in Eidfjord, a beautiful village in the arse end of nowhere, with a total of 250 inhabitants.

Apparently the quaint village of Eidfjord has to contend with around 500,000 tourists descending upon their little oasis every year….coming from a seaside town, I know how that feels – but nothing like on that kind of scale.  Helpful to the local economy yes, but extremely overwhelming I’d imagine.

The first place I went to check out was an Iron Age Burial Ground, located at the very top of a rather nasty hill which almost killed me.

Other than the epic hill towards the end, the walk to the above burial site was absolutely lovely….as the footpath took me right through the middle of a forest. I kept thinking how much my doggy Molly would’ve loved to have gone on this walk with me ❤

My favorite forest find was a lake located just off to the right of the main path.

It was surrounded by fjords, waterfalls, trees and nature.

I could’ve stayed here a while.  A loooong while.  And in that moment if you’d offered me a cup of tea and a guitar I definitely wouldn’t have gone anywhere.

Another building I wanted to check out was an old stone church dating back to the 14th century. Along with the church was a beautiful old cemetery (yes, I like looking at old graves…I’m weird and I don’t care who knows about it) and with the fjords as the backdrop it really was a beautiful sight – even on a cloudy day. 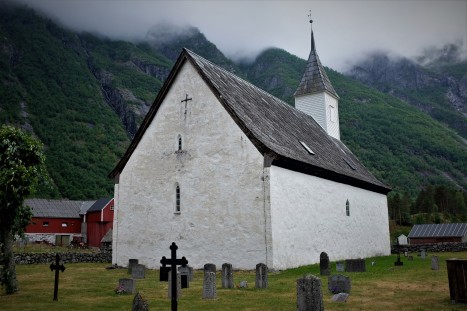 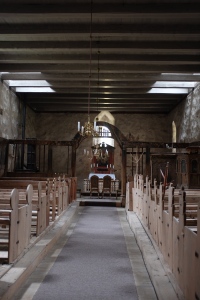 So having taken a ba-zillion and one photographs on my lovely cameras – I headed back to the ship….which looked enormous moored up in the tiny little village dock. 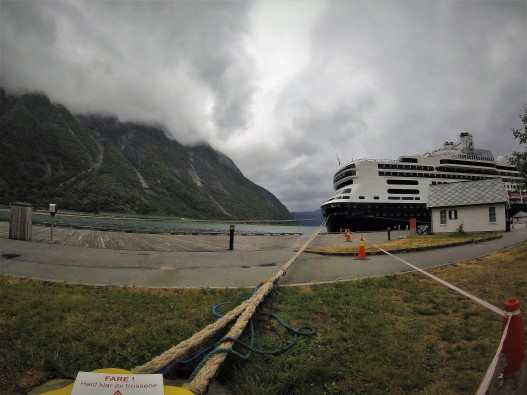 I very reluctantly said goodbye to beautiful Eidfjord.  What a gorgeous place.  History, hardly any people (well, except the hordes or tourists), tons of nature and zero phone or internet signal.

Surely this was the highlight of the trip – it can’t get any more beautiful than this, can it?

Multi-instrumentalist, songwriter, producer, teacher.  My posts cover all things creative and matters of the heart.  Thanks so much for stopping by!

Oh my goodness, this was such a fun tour 🙌♥️😄 Feb 2019 @rebeccaloebe released a new album and my chess buddy @sweet.gary and I were part of her power trio 💪 @willrobertson77 joined us on bass for a few shows 😄⭐️
I haven’t played at @thesaxonpub in over a year 😯 totally cray cray 🤦‍♀️💥🤷‍♀️ I miss it so much, as well as this group of dudes ♥️🌈 Here’s me playing bass with Shawn Pander, John Chipman, Gabriel Rhodes and Jacob Wolff 🎶
Hope you had a wonderful Easter weekend! 🐣⭐️🌈 I’ll be playing my usual weekly shows over on my FB page (link in bio ☀️):
See that beautiful @anfdrumco whiskey maple snare? Her name is Ryleigh ♥️ Not only does she look stunning, she sounds absolutely beautiful and is my main snare for recording.

Musician’s Survival Guide to a Killer Record
by Mixerman